A creative response to Goat Island’s 1991 performance ‘Can’t take Johnny to the funeral’.

Exhuming Johnny combines extreme physical exertion and sci-fi speculation to ask difficult questions about the effort of living in the present and our dreams of escaping to the past. How much sweat does it take to change the course of history? This new performance by Robert Walton and Company remixes Goat Island with Twin Peaks on a trip back to 1991.

Robert Walton was commissioned by The City of Chicago to respond to Goat Island’s third work ‘Can’t Take Johnny To The Funeral’ from 1991. During the first four months of 2019 Robert worked with performers from Australia, UK and USA to explore the grainy footage of the original production and the Goat Island Archive to create a new performance at The Chicago Cultural Center.

During a residency at Hyde Park Arts Center as part of the IN<TIME festival in February 2019 Robert investigated the choreography, history and themes of Goat Island’s complex, exacting and physically demanding performance. With the help of percussionist Tom Benko and live video specialist Mark Cominskey, a new performance was discovered by recreating parts of the original and returning to its themes of ‘bliss and terror in the modern world’ from a perspective almost 30 years later.

Exhuming Johnny is one of nine performances commissioned by the City of Chicago’s Department of Cultural Affairs and Special Events (DCASE) as part of the exhibition goat island archive – we have discovered the performance by making it. The exhibition is on view at the Chicago Cultural Center through June 23, 2019. Find out more about this project here.

As part of the exhibition, the Sidney R. Yates Gallery is transformed into a to-scale re-imagining of Goat Island’s former rehearsal space – a church gymnasium. Bryan Saner designed and oversaw the construction of the performance frame.

Tom Benko is a drummer/percussionist for Blue Man Group Chicago and the Chicago Bulls, and serves as Director of Percussion for Maine South High School (Park Ridge, IL). As a soloist, Tom combines electrified hammered dulcimer, custom built instruments, hand held percussion, marching percussion techniques, live looping and drum kit to create an eclectic blend of sounds for his compositions.  Tom is excited to travel back to the past, and excited to have a dog named “Dante Basco” or “Rufio” in the near future.

Mark Comiskey has been producing and performing theater and creating multimedia productions in Chicago and beyond since 1989. Most recently, Mark was a resident artist at the Ragdale Foundation where he served as DP & Editor for Erica Mott Productions dance film Cowboys & Vikings Trilogy. Mark has been the Video Supervisor of Chicago’s Blue Man Group since 2005. He saw Goat Island’s original performance of Can’t Take Johnny to the Funeral in 1991 at the Wellington Gym in Chicago. See his work at: www.comiskeymedia.squarespace.com

Callum Grant is a physical performer, musician, actor, writer, composer, director, sake-dragon and multi-purpose hack. He’s performed around the globe as a Blueman in Blue Man Group since 2005; highlights including: New York, London, Tokyo, Berlin, Sydney, Rio de Janeiro carnival and Chicago. Callum is a singer-songwriter and producer for his band duo Whisky Tales. Their new album ‘Key’ was released on all platforms last November. Callum enjoys scoring projects from indie movies to live improve collaborations with second city and iO alumni. He first worked with Robert Walton fifteen years ago as a student at the Royal Scottish Conservatoire where he earned a First Class Honours in Contemporary Theatre Practice. Callum is delighted to be reunited with Walton and collaborating again through the powers of the vortex.

Jean Grant is a Los Angeles based actress, screenwriter and filmmaker. Having graduated from Australia’s The Victorian College of the Arts with a Bachelor of Dramatic Art, Jean has an extensive background in theare-making, physical, classical and musical theatre. While living in Melbourne, Australia, Jean wrote, produced and starred in a meta short, A Short Film by Shauna Lee. In theatre, her favorite productions included It’s an Earthquake in my Heart, after Goat Island (VCA), Romeo and Juliet (VCA), All About Eve (VCA) and Assassins (Watch This). In 2014 she relocated to New York and studied under Kathleen Turner and Heidi Marshall. Her New York theatre credits include playing Sabrina in The Kioskers in Labapalooza! (St. Anne’s Warehouse) and at the Deep Space Performance Residency (NACL), Stick & Poke (Exquisite Corpse Company), The Disastrous Tale of Vera and Linus (Kipuka Theatre), Mama’s Almost Birthday (Gallery Players). Jean directed Alaina Ferris’ music video “Vesta”, part of Exquisite Corpse Company’s Surreal Summer on Governor’s Island. After returning to her family roots in Los Angeles, Jean began to collaborate with Liv Colliander as The Void. They completed their first sci-fi short, Birth Of A Pomegranate, in November 2018 in which Liv directed and Jean wrote and starred in. Currently, Jean is writing a sci-fi series and is always pondering what it means to be human in this strange universe.

Chris Mosier is a trailblazing hall of fame triathlete, All-American duathlete, and a 5-time member of Team USA. In 2015 he became the first known transgender man to make a men’s US National Team, and was the catalyst for change for the International Olympic Committee policy on transgender athletes. In 2016, he was sponsored by Nike and featured in his own Nike commercial which debuted on prime time during the Rio Olympics. Chris was the first trans athlete featured in the ESPN Body Issue. In addition to being an athlete, Chris is known as the go-to source for policy and information on transgender people in sport. He is the founder of transathlete.com and has mentored transgender athletes around the globe, from high school and recreational to the professional levels, and helped teams, leagues, and professional sports leagues create gender-inclusive policies. His appearance in this performance isn’t completely out of the blue; Chris has an arts degree but mostly draws inspiration through osmosis by living with his favorite performance artist, Zhen Heinemann.

Sebastian Robinson is an Australian-American actor, poet, performance artist and national HIV advocate. He has a Bachelor in Dramatic Art from The Victorian College of the Arts, The University of Melbourne. He co-created the original production Strangers in the Light which won Melbourne Fringe Award Best Circus Show in 2008. In 2012 Sebastian was the recipient of the Belluris John Tallis Award from VCA. In the same year he worked with Sisters Grimm on When Lorraine Stops Falling, The Rimming Club. Sebastian has performed with Melbourne Theatre Company and in Sydney for The 2014 Mardi Gras in Colette F Keen’s play The Death of Kings. In 2014 he played the role of Amos in the Award winning film Downriver, written and directed by Grant Scicluna and worked with MKA On the Grace of Officials. In 2017 Sebastian took his play ALPHA to the Edinburgh Fringe after a successful Australian tour and also took the lead in Patrick White’s play The Ham Funeral. In 2018 he performed a lead role in Mary Zimmerman’s adaptation of Metamorphosis. Sebastian first worked with Robert Walton in the 2013 adaptation of Goat Island’s ‘It’s an Earthquake in My Heart’.

Catie Rutledge (Chicago) is an artist who makes work that engages with experiences of grief, sexuality, and pop desire through practices of performance, video, writing, painting, and installation. She received a BFA with honors from the University of Wisconsin-Madison (2015) and an MFA from the School of the Art Institute of Chicago (2018). She has exhibited and performed nationally and internationally, including at Grace Exhibition Space (NYC), 65GRAND (Chicago) and Projet Pangée (Montreal). She is currently working on a performance that draws connections between the emo music she was obsessed with as a teenager and the experience of losing her father to suicide.

Robert Walton (Aus/UK) is a conceptual, media and performance artist whose work includes theatre, choreography, installation, writing and interactive art. Over the last two decades he has led interdisciplinary teams around the world fostering new forms of expression and creating extraordinary artworks that defy easy categorisation. Robert trained as a theatre maker at Dartington College of Arts (England) and as a technologist in The University of Glasgow’s Master of Science in Information Technology (Software and Systems) programme. Robert co-founded two Scottish arts organisations, Reader Performance Group (2001-5) and Fish & Game (2005–), his work has toured in the UK, Europe and Australia. In 2004 he created the world’s first social networking site for artists with New Work Network funded by Arts Council England. In 2010 he co-created the world’s first piece of iPad Theatre, Alma Mater funded by Creative Scotland. He moved to Australia in 2011 to join the Theatre Department at the Victorian College of Arts, University of Melbourne. Robert co-curated the Australian dance and performance works for Culture 2014, The XX Commonwealth Games (Glasgow). In 2015 Robert initiated In Your Hands, a three-year project with four teams of artists and app developers funded by The Australia Council’s Digital Theatre Initiative. He is co-creator of Vanitas, nominated for best Art and Experimental Mobile App at the 2018 Webby Awards, and two 2019 Greenroom Awards. In 2018 Robert was the Australia Council Artist in Residence at Blast Theory (UK), the world’s preeminent mixed-reality performance and technology arts organisation. In 2019 he is seconded to the University of Melbourne’s Faculty of Engineering, School of Computing and Information Systems to develop Child of Now, a public art work of scale as their first full-time artist in residence.

In 2014 Robert created a response to the Goat Island performance It’s an Earthquake in my Heart. Find out more about that project here.

goat island archive: we have discovered the performance by making it 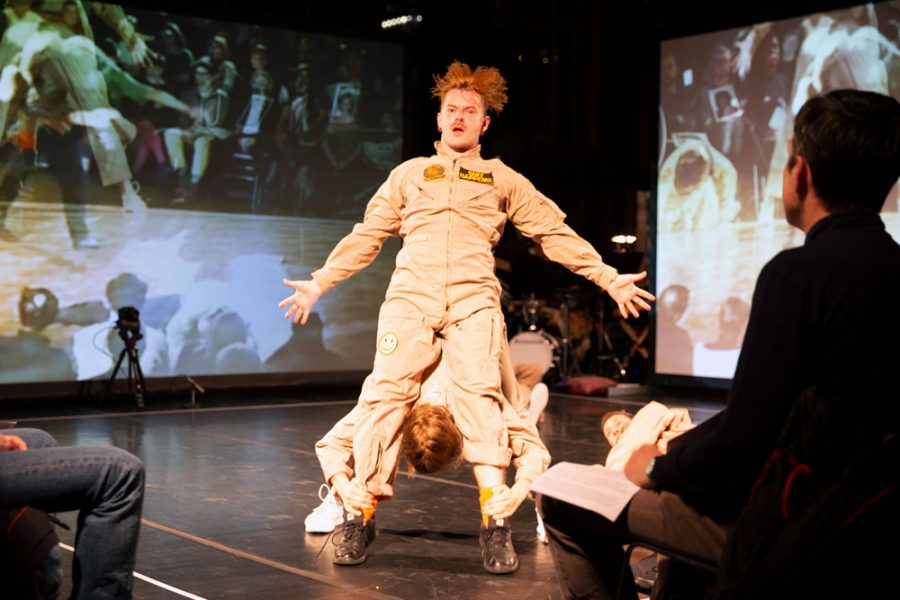 Exhuming Johnny combines extreme physical exertion and sci-fi speculation to ask difficult questions about the effort of living in the... 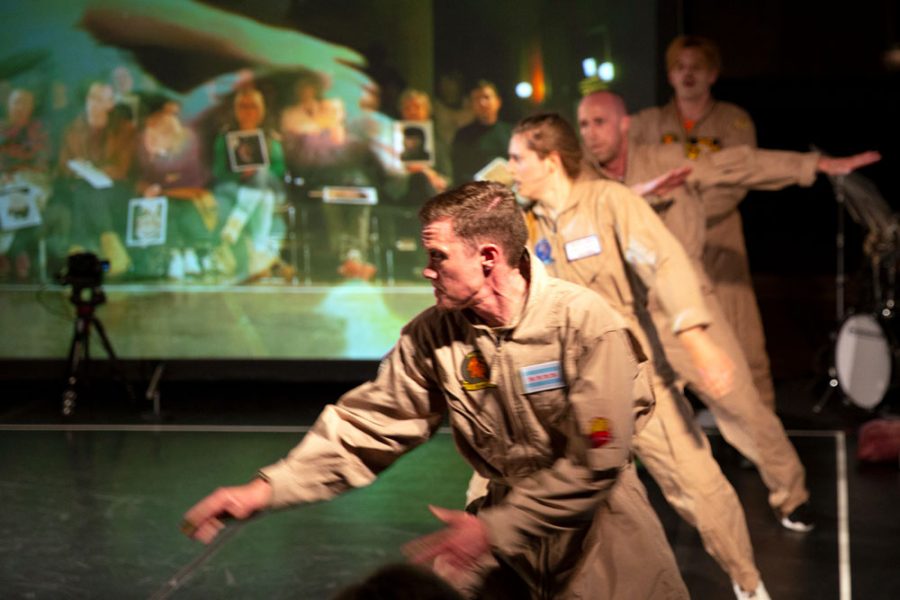 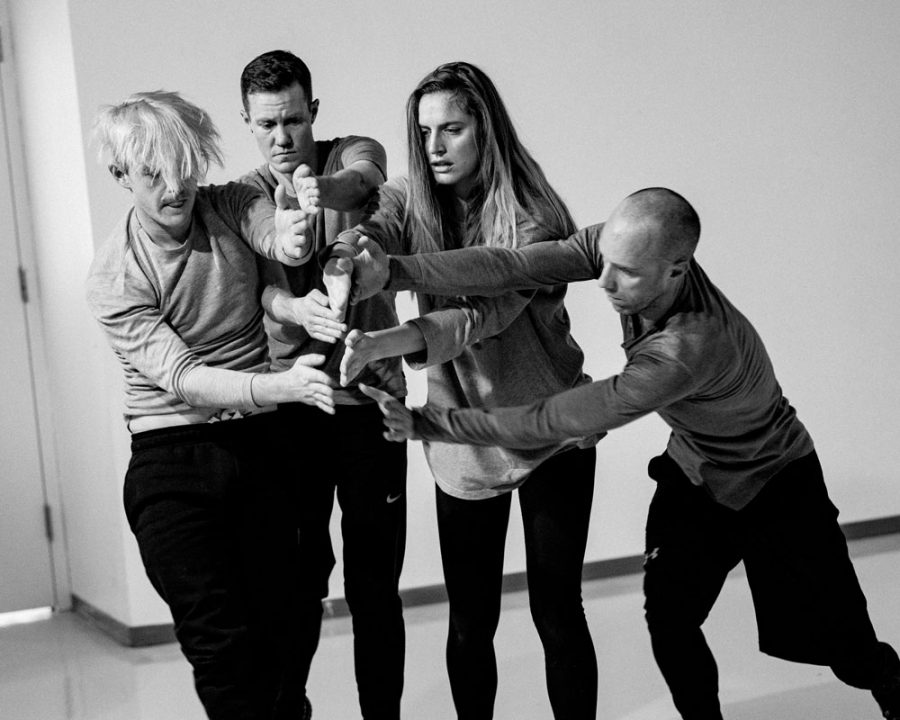 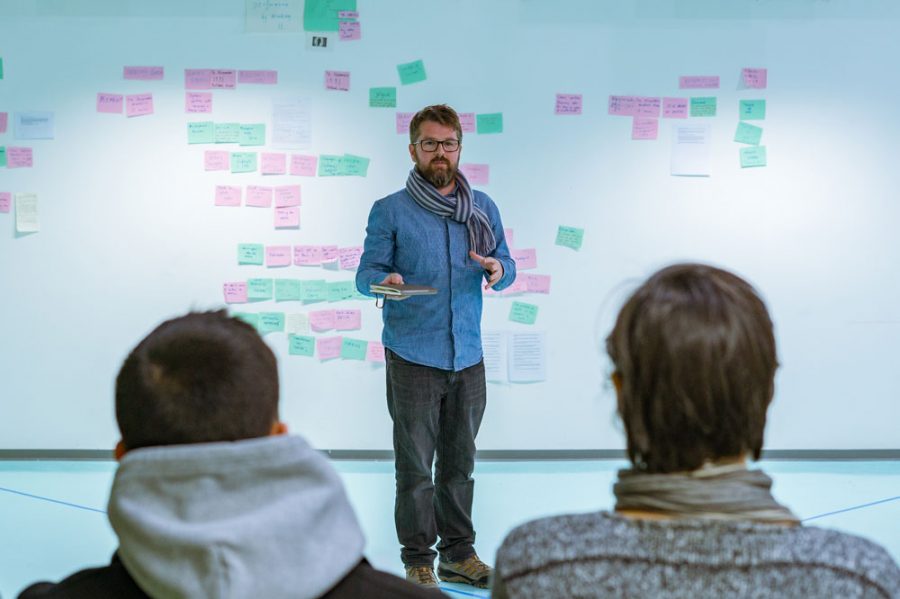 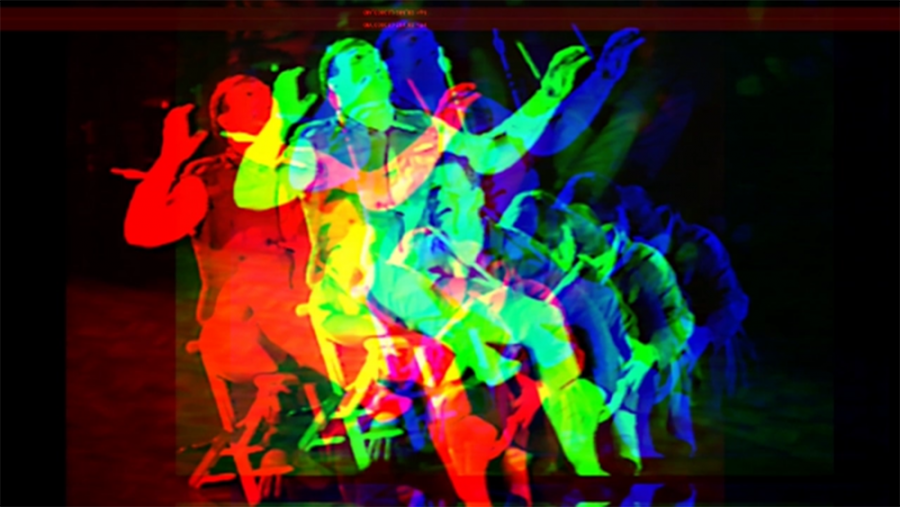